Go to website
Mostbet » Sports predictions » Netherlands vs USA. Prediction for the match of the World Cup

Netherlands vs USA. Prediction for the match of the World Cup

2-12-2022, 22:24
The Netherlands have not yet lost in the tournament, but whether the series of "orange" will last on December 3 in a duel with the USA - you will find the answer in the prediction. What rate to choose?

Our Expert Predictions & Analysis on Netherlands vs USA

The Netherlands national team was considered the unconditional favorite of its group, where it happened to compete with Qatar, Ecuador and Senegal. In the first round, Louis van Gaal 's team met with Senegal, where they won a 2-0 victory - quite confident in terms of score, but difficult in content. Both "orange" balls were scored at the end of the meeting, in which the Africans looked decent.

In the second round , the Netherlands failed to win - Ecuador survived. Despite the fact that, thanks to the efforts of Cody Gakpo, they managed to score already in the debut, the Ecuadorians managed to answer with a goal and were in no way inferior to the Netherlands. In the last group match, the Oranges had no problems with Qatar - scoring a goal in each of the halves, the Netherlands brought the matter to a confident 2-0 victory, which guaranteed victory in the group.

The US team ended up in the same group with England, Iran and Wales, where it was considered the main contender for the second ticket to the playoffs, the first was unconditionally taken by the British. In the first round, Gregg Berhalter's team met with Wales and gave an excellent starting half, as a result of which they had a one-goal lead. However, in the second half, the Yankees were passive - the result was a 1-1 draw, which was very ambiguous.

In the match against England, the Americans again looked brilliant in the first half - they had a lot of chances at the gates of a more status and experienced opponent, but could not convert them. In the second half, the USA played more pragmatically and painted a goalless draw with the group favorite.

The loss of points in a duel with Iran in the last round threatened to miss the playoffs. But they managed to beat the Iranians thanks to the only goal of Christian Pulisic - at the cost of injury, the Chelsea midfielder scored this ball, and his participation in the playoffs is in doubt. 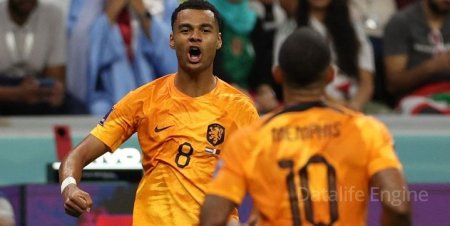 The Dutch national team did not reveal their full potential in the group stage - with the exception of the match against Qatar, where the Orange were significantly superior in the opponent's class, the game was far from ideal. At the same time, the Dutch are quite stable and know how to get results even with not the best game. In the confrontation with the United States, the "orange" are the favorites and will certainly justify their status - they have a significant advantage in experience and class.

We believe that the favorite will not be mistaken. Prediction- the victory of the Netherlands. In Mostbet bookmaker, such an outcome is offered with a coefficient of 1.97.

The Netherlands team was very productive in qualifying and in the Nations League, but at the World Cup in the group performed very modestly in this regard. At the same time, there are no serious problems with the implementation, the US team does not close on the defensive, and with such an opponent, the Orange can realize their attacking potential. Odanko and the Americans also have a high-quality attack and will not give up a dry ticket to the quarterfinals.

Our second bet will be the victory of the Netherlands and both will score. Such a bet in Mostbet can be placed for 4.75.
Next article Previous article