Go to website
Mostbet » Sports predictions » "Busan Ai Park" vs "Gwangju". Prediction for the match of the championship of South Korea

"Busan Ai Park" vs "Gwangju". Prediction for the match of the championship of South Korea

24-07-2022, 12:48
Prediction and bet on Busan Ai Park vs Gwangju, statistics, odds. In the second most important league in South Korea on July 27, the next round will take place. Consider the match between Busan Ai Park and Gwangju. The worst team of the championship against the best. Will there be some intrigue here? You will find the answer in our prediction.

Our Expert Predictions & Analysis on "Busan Ai Park" vs "Gwangju"

Busan Ai Park  lives on the last 11th line in the standings. The team suffered 15 defeats in 26 matches. The club cannot win over four rounds, including three defeats. The team has big problems in the attack, because for 360 minutes it has not been possible to hit the opponent's goal.

Gwangju  tops the league table. The team is doing well, it has 52 points and is seriously ahead of its closest competitors. However, in the last rounds, there has been a slight decline. In the previous four rounds, the club won only once. But it is worth highlighting that he never allowed himself to lose. 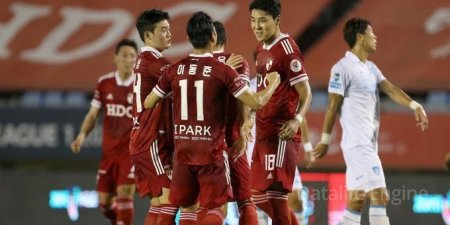 Obviously, the opponents are at different levels and their position in the table fully confirms these beliefs. Gwangju, as the favorite, is simply obliged to score three points here. Busan Ai Park looks very faded in attack, and it cannot be said that it shines in defense. Any missed goal for the hosts can be fatal.

Prediction - Gwangju victory. In Mostbet, such an outcome can be taken with a coefficient of 1.78.

It is hardly worth expecting too many goals. They definitely should not be expected from the hosts, who have completely forgotten how to realize their scoring opportunities. "Gwangju" can limit itself to two balls, which will be enough to score three points on duty.

Our second bet will be under 2.5 goals . Such a bet can be played for a quote of 1.94 .
Next article Previous article